Sports and Development website refers to sport as a tool for socio-economic development. Sports stakeholders including, academia, private sector, NGOs, government agencies, UN agencies, international organisations, and young people are increasingly having an interest in the potential of sport as a tool to reach personal, community, national and international development objectives. They are also interested in how sport can be used as a tool for addressing some of the challenges that arise from humanitarian crises and in conflict and post-conflict settings. 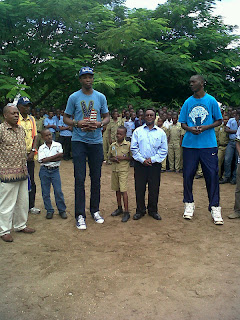 As sports increasingly becomes a part of humanitarian and development work, as well as a part of the corporate social responsibility practices of some private sector actors, interested parties are anxious to explore the potential, as well as the limitations, of sport in their work.

Sports, if well planned and implemented, can be a very powerful tool which can influence socio-economic development of a society. The following are some of the areas in which sports can be very useful:

Sports can support “child development”. Gale Encyclopedia of Education argues that numerous studies support the positive relationship that exists between psychological well-being and regular involvement in physical activity, especially in the areas of reduction of anxiety and depression.

Sports may serve to transmit general societal values, which leads many sport authorities to believe that sports has positive value for the participants in building character, discipline, a strong work ethic, and the ability to work in teams.

On “sports and gender development”, Allison Huggins and Shirley Randell in their paper titled “The Contribution of Sports to Gender Equality and Women’s Empowerment” comment that by creating opportunities for women and girls to engage in sport, communities and societies empower women and girls on an individual level, by promoting self-confidence, leadership, teamwork skills and a sense of achievement.

They also challenge existing gender norms and roles within society. Sports provide a space in which women can renegotiate concepts of femininity and masculinity, challenge stereotypes which label women as weak and inferior, and demonstrate to their communities what they are capable of achieving. As such, promoting girls’ and women’s involvement in sports is an important tool in gender equality and women’s empowerment and, more broadly, in development and social change.

The “Sport and Development” website argues that research among young women in South Africa indicated that athletes from one sample were more likely to have fewer children than non-athlete females from the same region. Evidence from among young women in high-income countries shows that female athletes are less likely to consume drugs (such as cocaine, marijuana, etc.) than non-athletes. Involvement in regular physical activity enhances physical and mental health and well-being, including among women and girls.

Some research using the concept of self-esteem suggests that girls and women who participate in sports and physical activity in both developed and developing countries demonstrate higher self-esteem as well as improved self-perception, self-worth, self-efficacy and so on.

These improvements are associated with enhanced feelings of accomplishment, perceptions of improved physical appearance and commitment to exercise. Evidence from developing countries shows that involvement in organised sports activities helped to enhance girls’ sense of agency, self-empowerment and personal freedom. Some sports programmes provide women and girls with opportunities to develop leadership skills.

There is a large amount of compelling evidence from both developed and developing countries reflecting the relationship between sports participation and social integration and social inclusion of women and girls.

Sports has an important role to play in improving “diplomatic relations and peace building”. The contribution sports can make towards peace-building efforts has generally been considered at the grassroots and nation state levels.

According to “Sports and Development” organization, at the grassroots or community level, sports can be seen to provide a useful way of creating an environment in which people can come together to: work towards the same goal, show respect for others and share space and equipment. All these aspects are crucial to peace-building processes and are exemplified in findings from a Peace Players International programme.

A study on the role of sport in fostering “social integration” among different ethnic groups in South African schools showed that several factors contributed to the use of sports being successful in bringing about exchange and building relationships between different groups, including sport’s non-verbal means of communication; sport as a means to engage in collective experience and establish direct physical contact; and sport’s ability to transcend class divisions.

It is further argued by ‘Sport&Dev.com’ that the “Open Fun Football” schools program were initiated in Bosnia-Herzegovina, using grassroots football as a means to provide a site for interaction and to build relationships between young people and coaches.

Since then, the initiative has expanded to being a reconciliation tool to encourage understanding and tolerance in FYR of Macedonia, Serbia and Montenegro, Moldova, Georgia and various other countries in the Balkans, the Caucasus and in the Middle East.

We have observed how sport has been used by Rwanda President Paul Kagame, Iraqi, Eastern Europe and the Middle East, as the first significant post-war contact between communities that were deeply hostile to one another.

“Sport and National Identity”. The United Nations Report on the International Year of Sport and Physical Education 2005 highlights the benefits that sports can bring in building national identity. Sports can provide a positive image of the nation to the international community. Studies on specific cases have shown that sports, especially football, can positively contribute to strengthening national pride and forming a cohesive national identity.

In addition, many scholars associate the importing of modern sports into former colonies as an explicit strategy of imperialism and conquest. In this sense, it is necessary to consider both the potential dangers and benefits of sports in forming national identity.

Can sports be separated from politics? What are detrimental effects if sports is too much politicized? Serge Bainvel in his article “Sport and Politics: A study of the relationship between International Politics”, argue that Pierre de Coubertin, founder of the International Olympic Committee, and considered father of the modern Olympic Games, wanted Olympics to bring peace and without political means, but the situation changed rapidly everything and government policies were really influenced by sports. Not only totalitarian states but also democratic ones have been using sport for their propaganda to promote national strength. It has been like a trigger mechanism, everyone has understood how to use sport for diplomatic relations and it is a safer and harmless way than a war.

The ancient Olympics were a model of cooperation, achievement and the pursuit of excellence. They were also frequently a place where political alliances were formed and broken, the famous Olympic truce was tested, and commerce and grandstanding developed.

Politicising sports can produce nationalist expressions that are detrimental to peace. For example, the 1956 Olympic water polo match between Hungary and the Soviet Union that took place after the Soviet invasion of Budapest led to violent clashes between the athletes. Government have frequently utilized sport as a political too

Sports can play an important role in “economic development”. The USAID report on “Role of Sports as Development Tool” reveals that although it is an area that requires more attention and research, there is already plenty of evidence that sport can be used to spur economic development. The construction and rehabilitation of sports facilities and development of sport for entertainment create employment and marketing opportunities. The manufacturing of sports equipment also serves as a source of jobs. Furthermore, sports programs can be used as a training ground for a new work force, teaching skills that make young people more employable and productive.

Sport has the capacity to transform the lives of individuals. It boosts physical, psychological, emotional, and social well-being and development. At the same time sports plays a significant role in cultures and communities around the world. These factors alone justify investment in sports programming. But there is also a growing understanding that sports programs merit support because they are powerful vehicles for achieving broader goals, particularly in advancing development and peace agendas.