Mainland champions Simba laboured to beat Djibouti’s Ports 3-0 during their group A match of the Kagame Cup championship played at the national Stadium in Dar es Salaam yesterday.

Ports kicked off the game explosively and looked a different outfit that conceded seven goals at the hands of DRC’s As Vita during the tournament opener last Sunday. 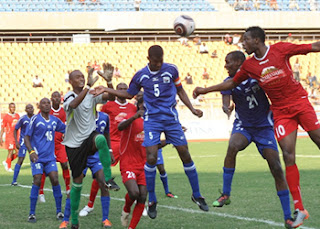 The Djibouti team dominated the first opening five minutes to pin Simba on the defence.

Ports striker Roland Ayuk threw overboard a glorious opportunity to put his team ahead when he unleashed a
thunderbolt that sailed over the cross bar from inside the box.

Simba’s Zambian import tested Ports goalkeeper with a powerful shot after 25 minutes. Sunzu misfired more than three times during the opening half as Simba fans longed for the opener at the stands.

Sunzu failed to connect home Kanu Mbiyavanga’s cross on the face of  Ports goal after 33 minutes as profligacy prevailed.

The pressure was still at Ports’ goal as they lost midfield possession on several occasions. It was Sunzu again who missed a glorious opportunity after being superbly set up by the impressive Haruna Moshi, shooting wide
much to the amazement of samba fans at the stands.

Two minutes to half time Mbiyavanga’s shot was timely parried to safety for an abortive corner.

Unheralded Ports looked dangerous on counter attacks as Roland Ayuk dribbled inside the box before Shomari
Kapombe came to the rescue.
Ports striker Roland Ayuk is flagged offside as he tried to get the better of Simba defence and referee Denis Batte blew a whistle to signal the end of first half.

Simba coach Milovan Circovic made two substitutions as the second half got underway with  Abdallah Juma coming in for Haruna Moshi while Juma Nyoso replaced Amri Kiemba.

The changes proved effective as the game exploded into life again with Simba dominating the attacks more often.

Felix Sunzu scored the second for Simba after 64 minutes when Mwinyi Kazimotor dribbled past a defender who handed the ball inside the box.

The Zambian import made no mistake to slot home the penalty and clear his first half dozens of misfiring.

Simba play AS Vita in their final group A match on Saturday to determine their next opponent of the quarterfinal stages.