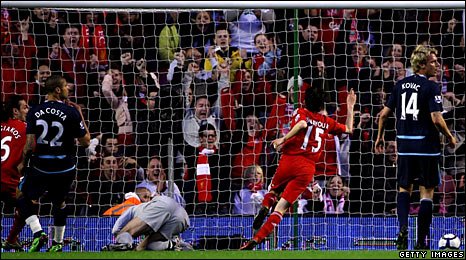 The alert Benayoun puts Liverpool in front at Anfield

Liverpool moved back into sixth place after an emphatic win over West Ham, who remain one place above the relegation zone.

Yossi Benayoun put them ahead in unusual fashion, diverting a Steven Gerrard cross in off his stomach.

David Ngog added a second with a fiercely struck snap shot from a Maxi Rodriguez cross as the Reds dominated.

After the break a Sotiros Kyrgiakos header came back off a post and in off the leg of Hammers keeper Robert Green.

It was a wretched display from West Ham, who have not won at Anfield for 47 years and may not have the chance to play there next season if their fortunes do not improve, having succumbed to their seventh defeat in the last nine games.

Torres will be fit for World Cup – Benitez

They now face a critical home fixture with Wigan on Saturday mindful of awkward closing games away to Fulham and home to Champions League-chasing Manchester City.

Liverpool, who plan to set off for Thursday’s Europa League semi-final first leg at Atletico Madrid on Tuesday lunchtime because of the volcanic ash saga, are now a point clear of Aston Villa having played a game more.

They have a home match with Chelsea either side of winnable away trips to Burnley and Hull.

With both sides having plenty to play for the opening exchanges were remarkably tame, anguished cries from the players were often audible on the rare occasions when West Ham’s vociferous 1,500 travelling contingent were not making themselves heard.

Benayoun teed up an early chance for Rodriguez but his shot was easily saved by Green.

The Hammers enjoyed some comfortable early possession in midfield but posed little direct threat and the kind of cunning invention typified by their manager Gianfranco Zola as a player.

Benayoun ghosted between the defenders and was completely free on the edge of the six-yard box as Gerrard’s free-kick from the right-hand touchline bounced just in front of him.

The industrious Israeli diverted the ball in off the post with his stomach, carefully keeping his hands out of the way, despite appeals to the contrary from West Ham defenders.

More atrocious defending from the visitors gave Liverpool another golden opportunity, but from inside the six-yard box Kyrgiakos somehow headed a right-wing Gerrard corner into the ground and the ball bounced over.

It did not prove at all critical as with the move of the match Liverpool doubled their lead shortly before the half-hour.

Benayoun’s quick pass found Rodriguez on the right and his first time cross was met instantly on the half-volley by Ngog, whose shot was too fierce for Green to keep out, even though the England goalkeeper got a hand to the ball.

Zola vows to bounce back from defeat

The remainder of the match was merely a procession for Liverpool, who might conceivably have had three penalties – two for handball and one for a foul on Ngog.

West Ham, badly missing the purpose of the suspended Scott Parker, introduced Guillermo Franco at half-time but Liverpool extended their advantage as another teasing Gerrard free-kick, this time from the left, caused more distress in the visiting defence.

Kyrgiakos met the ball from close range and West Ham’s misfortune was summed up when it rebounded off a post on to the back of Green’s leg and into the net.

Liverpool could even afford to take off Gerrard, Benayoun and Ngog to allow them a rest ahead of Thursday, while West Ham suffered even greater misery when Carlton Cole went off with a knee injury.

“We have to keep doing our job. It will be more difficult now [to qualify for the Champions League because Tottenham won [against Chelsea], normally you would not expect them to win.

“But we have to be in a good position if they make a mistake.

“West Ham started the game pushing but as soon as we scored the first goal it was easier, we had more chances and we scored the second goal and the third one killed the game.”

“We started well. We were quite comfortable on the pitch. We suffered on dead balls – normally we are very good defending against them but not today.

“The first goal was a killer, I felt we were on top of the game.

“The second was a distraction, that was a killer. After 2-0 it was difficult for us.

“In the second half we tried to have a go and press them hard but they scored on a dead ball.”