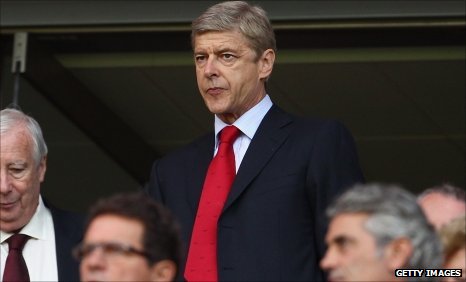 Wenger was in the stands during the first leg against Udinese
Arsene Wenger has been handed a two-match ban by Uefa after being found guilty of breaching the terms of a previous Champions League sanction.

The 61-year-old Arsenal manager has also been fined 10,000 euros (£8,742) for improper conduct.
He received the punishment after he was found guilty of communicating with the bench while serving a touchline ban during the first leg of Arsenal’s tie against Udinese on Tuesday, 16 August.
Arsenal will appeal against the ban.
The ban will take effect immediately, with Wenger set to sit in the stands on Wednesday during the second leg of Arsenal’s group stage play-off match against the Italian side.
A Uefa statement said: “The Uefa control and disciplinary body has suspended manager Arsene Wenger from carrying out his duties at Arsenal’s next two Uefa competition matches.

“Today’s decision was taken in relation to the Arsenal manager not abiding by the decision of the control and disciplinary body during the English club’s Champions League play-off game against Udinese.
“Wenger is therefore suspended for Arsenal’s second-leg match against Udinese in Italy on Wednesday and then the next Uefa competition fixture for which he would be eligible.”
The Gunners boss believed he had not done anything wrong after the club had told him he could pass messages to assistant Pat Rice via a coach during the first leg at Emirates Stadium. He was then told at half-time that this was not allowed.
Wenger said it was frustrating because the club had asked Uefa before the match for clarification of the rules and that he had stuck to them.
“That’s why I’m quite surprised they need an inquiry because they gave us the rules and we observed strictly what they told us,” he said on Friday.
European football’s governing body said Uefa regulations meant the manager “may follow the game from the stands only”.