Mainland champions Young Africans are to pay a heavy price resulting from pitch violence during their premiership soccer match against title favourites Azam at the national Stadium in Dar es Salaam last Saturday. 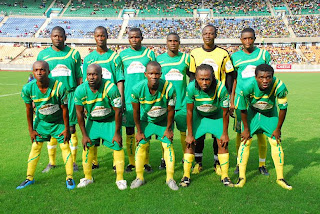 Five of the team’s players have been fined and banned by the Tanzania Football Federation for assaulting referee Israel Nkongo.

The heaviest axe fell on Yanga’s industrious left back Stephano Mwasika who was found guilty of directly punching the referee during the violence that has shocked most of the soccer fans in the country.

Mwasika who joined the club two years ago will serve a one year ban n and pay one million shillings as decided by the TFF’s premier soccer league committee that held its session in Dar es Salaam on Monday.

While other Yanga players rushed to the referee disputing a red card he flashed to midfielder Haring Niyonzima, Mwasika ran with incredible pace then spectacularly jumped high to punch the referee.

However, Mwasika got away with it as referee flashed red card to Nadir Haroub instead.

Other Yanga players who have been fined to the tune of half million shillings and slapped three-match bans include Nurdin Bakari and Omega Seme.

Beside the half million shillings fine, Jerry Tegete has been banned for six months while centre back Haroub has to serve six-match ban.

The club itself has to part with half million for crowd trouble caused by their fans during the match. Additional half million shillings fine has also been imposed on the club after more than five of their players were flashed with warning cards

Third placed Yanga have attained 37 points in 18 appearances with eight matches to wind up the season.

This is a big blow to the title holders who have kept their retention bid at stake particularly after losing the violence-marred match to Azam by 3-1 goals, the team’s heaviest defeat for the season.

The bans start to be implemented this week when the team meets African Lyon at the National Stadium in Dar es Salaam today.

However, the premier league committee hailed efforts by Yanga skipper Shadrack Nsajigwa, Hamis Kiiza and their coach Kostadin Papic for calming the frustrated players during the brawl.

The premier league committee has also imposed a half million shillings fine to relegation-haunted Villa Squad for crowd trouble on the stands during their league tie against Azam played on February 15 at the Chamazi Stadium.

On top of the fine the team has also to pay additional 300,000/- for reporting late ahead of their match against hosts Mtibwa Sugar on February 19 at the Manungu venue. The penalty is in conformity with premier league chapter 8(13).

Police Dodoma would not avoid the TF axe as their player Juma Mohamed has been suspended for three matches and should pay half million shillings in fine after assaulting spectators with bottled water during the match against Villa Squad played on February 11 at the Jamhuri Stadium in Dodoma.
SOURCE: THE GUARDIAN