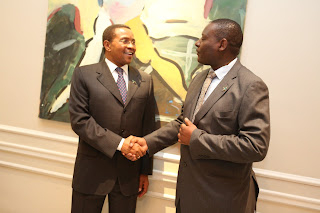 The President, with the First Lady Mama Salma, requested to meet the team during The President’s official trip to London to wish them all the best for their success in the Olympics. 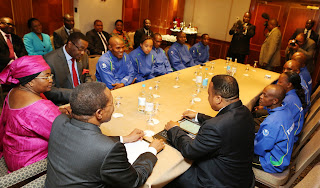 The President reminded the athletes that the country is behind them and also asked them to push themselves to the limit and to let Filbert Bayi,John Akhwari Stephen, Nzael Kyomo, Juma Ikangaa, Suleiman Nyambui, William Isangura Swaleh Simba and Gidemus Shahanga be an inspiration to their success. On his side he promised to keep on working hard toward helping other sports associations to achieve high standards of performance by helping them get an international coach for their sport.
The head of delegation of the Tanzanian Team, Mr Jarufu, thanked the government for the support and even joked that for the first time the team’s farewell cceremony was held at Kempisk Hotel – to which the President replied “Not Veta Chang’ombe…”!!