The national women soccer team (Twiga Stars) officials have expressed shock and disappointment over the recent widely publicised immoral sex allegations that haunt the team’s players.
The Tanzania Women Football (TWF) chairperson, Lina Mhando, said she has been astonished by the way the allegations have been handled by the media. 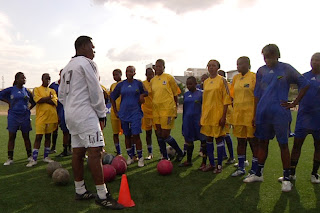 She said the scandal has completely tarnished the team’s reputation and has rocked the efforts to promote women soccer that has otherwise been on the right track.

Mhando was speaking at a press conference in Dar es Salaam yesterday in presence of the team manager Furaha Francis and coach Charles Boniface who stepped down after the team’s defeat to miss the African Women Championship berth.

Mhando said the breaking of the scandal regardless of its truth has sent powerful shockwaves to the entire fraternity of football in the country as the team has to a big extent lost valuable credibility.

She said there is no concrete proof of the published scandal.

The TWFA boss said the team has always been enjoying media coverage but the unfolding of the scandal that never exist and based on hear say has left a huge scar on the team and officials all together.

“We have been working around the clock to boost the team and promote women football but the non-existing scandal has crippled our efforts to the widest dimension,” she said.

Team manager Francis said the scandal whether exists or not has been blown over proportions and there is no proof to substantiate the allegations over the Twiga Stars players.

The team’s former coach Boniface said he has been misquoted by some reporters when he announced his decision to step down from the team he cherished most last week.

Boniface, who led the team into their maiden African Women Championship berth in South Africa in 2010, said he stepped down due to poor performance and not otherwise.

Boniface denied the scandal as a basic ground of his resignation, but he had to be responsible of the team’s performance in the qualifiers.

“When you refer to my interview, I never made such comment. It must be a misunderstanding. It has nothing to do with my resignation. I stepped down because we were knocked out by Ethiopia,” Mkwasa said,

Some newspapers linked him with the immoral sex scandal which he says was a distortion to the worst. The coach said he has been disappointed to read from newspapers on the scandal that left him and the team in total frustration.

The ‘scandal’ unfolded in awake of the team’s elimination from the AWC after losing to Ethiopia in both qualifier legs to prompt resignation of head coach Boniface.

The women team lost to Ethiopia by aggregate 3-1 goals including the return leg by a single goal before home supporters at the National Stadium in Dar es Salaam a fortnight ago.

Some pundits wonder whether such ‘scandal’ would have been unfolded should the team made progression to win the AWC berth in Equatorial Guinea.
SOURCE: THE GUARDIAN