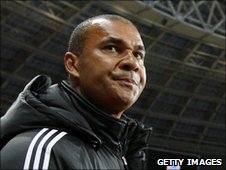 Gullit spent only five months in charge of Terek Grozny
Ruud Gullit has been sacked as manager of Russian side Terek Grozny.

Gullit, 48, was appointed Terek boss in January, but had been told by club president Ramzan Kadyrov that Terek must win at Amkar Perm on Tuesday.
After a last-minute goal condemned them to a 1-0 defeat, Kadyrov told Interfax: “Gullit will no longer train Terek. Under him, the team have played exceptionally poorly this season.”
The result leaves Terek lying 14th in the 16-team Russian Premier League.
“I don’t think it would have mattered if I had won or lost,” said Gullit, who has also had spells in charge of Chelsea, Newcastle, Feyenoord and LA Galaxy.
On his arrival in Chechnya he was given the target of taking Terek to a top-eight position in the league by mid-season, but managed only three wins in 13 games in charge.
In a statement on the club’s website before the Amkar Perm game, Kadyrov, who is also the Chechen president, said he was “extremely dissatisfied” with Gullit’s performance.
“Considering all this, Ramzan Kadyrov is presenting Ruud Gullit with the task of bringing back three points from Perm,” continued the statement.
“In the event of the opposite outcome, Gullit will be dismissed from the position of head coach.”
Gullit, a former world player of the year and one of the most successful players in the history of Dutch football, signed an 18-month contract when he joined Terek.
The Russian government had invested significant political hopes in the Chechen team’s sporting success, in an attempt to move forward after two decades of ruinous conflict with the breakaway region.