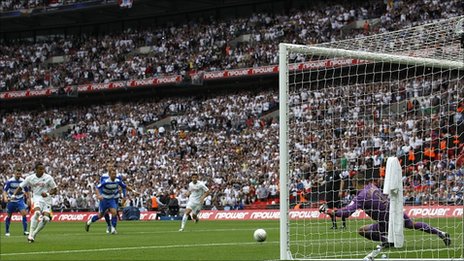 Scott Sinclair tucks away a penalty to give Swansea the lead

Scott Sinclair hit a hat-trick as Swansea became the first Welsh side to claim a place in the Premier League after holding off a brave Reading fightback in a pulsating Championship play-off final at Wembley.

The Swans have not played in the top flight of English football since 1983 but they scored three unanswered first-half goals to take control of Monday’s match.
Sinclair struck twice in as many minutes midway through the half, first from the penalty spot and then with a close-range finish, before Stephen Dobbie scored with his right foot from 16 yards.
Royals substitute Jay Tabb and assistant manager Nigel Gibbs were both red carded at the break after abusing referee Phil Dowd on what was turning into an afternoon to forget for Brian McDermott and his team, but the Royals surged back into the contest after the restart.
Joe Allen headed into his own net following Noel Hunt’s flicked header, and Matt Mills converted a corner as Reading scored twice in eight minutes to leave the contest on a knife edge.
Jem Karacan struck the Swansea post but Sinclair converted his second penalty of the afternoon 10 minutes from the end as the Welsh side held on.
Swansea, who almost went out of business nine years ago, were far from their fluent best for most of the match but showed guts and resolve as Reading tore into them after the break.
And their victory means that boss Brendan Rodgers, sacked by Reading after 23 games in charge in December 2009, ends his first campaign in South Wales celebrating the first promotion of his managerial career.
Reading started the match with an intensity and tempo that suggested they did not want Swansea to settle into their smooth passing rhythm.
Shane Long buzzed along the Swans back line and the Welsh side looked rattled, with keeper Dorus De Vries spilling a low cross that Ashley Williams eventually cleared.
Swans right-back Alan Tate surrendered ground every time fit-again Royals winger Jimmy Kebe was in possession and the Reading man underlined his intent with one particularly dangerous run from inside his own half to the edge of his opponent’s area.
Reading were perhaps unlucky not to be awarded a penalty of their own when central defender Garry Monk appeared to handle the ball.
However, the complexion of the contest changed completely when Sinclair scored his quick-fire double.
Nathan Dyer, the club’s player of the season, had been anonymous but there was no doubt that Zurab Khizanishvili clumsily hacked him down for the penalty that Sinclair casually slotted home with a precise low finish.
The Reading defender was one of three players booked in the opening minutes of the game and he was perhaps fortunate to escape a second yellow for his foul on Dyer.
The Royals did not have time to regroup before Swansea scored again, with left-back Ian Harte’s lack of pace cruelly exposed in the build-up.
Dobbie surged past the Irishman, who had a comfortable head start in the race for the ball, before delivering a low cross that Adam Federici could only deflect into the path of Sinclair, who slotted home from six yards.
Royals striker Hunt headed wide from a corner at the near post but the momentum was now firmly with the Welsh side, who struck their third shortly before the break.
Again the goal originated down the right, with Jobi McAnuff unable to block Dyer’s cross and Dobbie slotting home from 16 yards after Khizanishvili deflected the ball into his path.
Reading might have given themselves a lifeline before the break, but Long scuffed his six-yard strike after a deep cross fell invitingly at his feet, while De Vries saved a crisp 20-yard striker from Mikele Leigertwood.
Reading’s afternoon deteriorated even further during the break when substitute Tabb and assistant manager Gibbs were both given their red cards.
But their crestfallen supporters were given encouragement shortly after the restart when Allen deflected a header into his own net at the near post after Hunt’s flick.
The Swans almost restored their three-goal lead but Dobbie, who was substituted for Darren Pratley straight afterwards, shot disappointingly wide from a good position at the end of a brilliant mazy run.
His profligacy was punished as Royals skipper Mills headed home from a corner to bring his team right back into the contest.
The momentum was fully with the Berkshire club and they almost equalised but a deflected Jem Karacan shot hit the base of the post and Monk blocked Hunt’s goal-bound follow-up.
Swansea then restored their crucial two-goal advantage when Sinclair completed his hat-trick with a penalty that just eluded the dive of Federici.
There was no doubt about the spot kick, which was awarded after Andy Griffin clumsily fouled Fabio Borini and the Swans played out the final minutes with relatively few alarms to complete an incredible journey from League Two to the Premier League in six years.