The Chief Financial Officer of NMB, Mr Waziri Barnabas, was sports guest at the BBC Swahili studio at Bush House, London, on Saturday 28th April. During the live coverage of the Arsenal and Stoke city Premier League game at Brittania stadium, Mr Waziri, was asked by Ulimwengu Wa Soka Presenter, Idi Seif, about NMB’s involvement and commitment to assist football development in Tanzania. 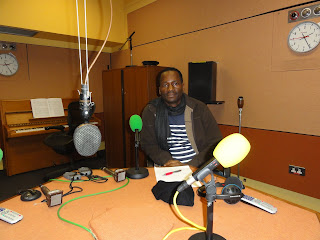 He said that NMB is very involved and working closely with the Tanzania Football Association (TFF). “We are the main sponsor of the national team, Taifa Stars, through providing them sports gears and also involved in a ball project which we started in 2011. Under this project we distributed 5000 balls to schools around the country through our branches around the country”, he said. The NMB is also helping the TFF Youth football development programme. Asked about the standard of football in Tanzania, Mr Waziri was impressed with the Tanzania Premier League and the stiff competition coming from new teams, for example, TOTO Africa and Azam FC . He underlined the need for TFF to ensure good governance during football matches to avoid disputes arising that lead to teams winning after making appeals to the appeal board. He also stressed the importance of discipline amongst players. He said NMB is always open to considering support for sports development in Tanzania provided it fits with NMB plans and budget. Mr Waziri, who is a Pamba FC Mwanza fan, is hoping that his team will return to the Premier League sooner rather than later so that Mwanza, the second biggest city in Tanzania, can have two teams again in the Premier League. He also supports Arsenal FC in UK. Later in the programme Mr Waziri participated in analyzing the Arsenal –Stoke match together with the BBC Presenters and one of the BBC pundits, Israel Saria. Lastly he wished the Twiga stars and the Tanzania National Ladies Football Team the best of luck for their coming friendly match in Mwanza against Uganda.