Follow us
Search
Submit Your Article
Subscribe
Menu
Simba have progressed into the next stage of the CAF Confederations Cup after beating visiting Kiyovu Sport by 2-1 goals in the return leg match played at the National Stadium in Dar es Salaam yesterday.
The Tanzania representatives have therefore sent packing the Rwanda team on 3-2 goals aggregates following the 1-1 draw result in the first leg match played a fortnight ago in Kigali.
It was Simba’s Zambian import striker Felix Sunzu who scored two first half goals that temporarily paralysed the visitors. 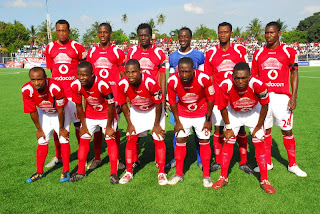 Sunzu was on target for Simba after 19 minutes when he made full use of a beautiful pass off Emmanuel Okwi who dissected the Kiyovu Sport defensive line-up before releasing the through pass.
The goal was scored against the run of play as Kiyovu strikers had made attempts to score early on.
Okwi was a thorn into the flesh of the visitors when he outwitted several defenders before providing a penetration pass to Sunzu who increased the tally for Simba after 32 minutes.
The game stabilized thereafter with Simba looking highly composed while the visitors were settling their defence to avoid more havoc. The home side progressed into the dressing room
The hosts threw overboard many scoring opportunities at the start of the second half while Kiyovu defended well their goal and launched sporadic attacks.
Simba were complacent as the second half was underway to steadily give their opponents a gradual build up of confidence.
The visitors launched attacks in the final twenty minutes that left Simba defence committing mistakes that were not fully utilized by the Rwanda side.
Kiyovu coach Jean Baptise Kayiranga introduced Nelly Mayanja for Egide Mutayisire who made a difference in the striking force.
Mayanja was on target after 77 minutes to beat goalkeeper Juma Kaseja with a rasping shot as Kiyovu players quickly took the ball to the centre of the pitch for restart.
The tempo of the game changed with Kiyovu besieging Simba goal and it was goalkeeper Kaseja who saved the day with fine saves to deny the visitors a goal that would have seen them through.
Simba goal was under pressure for most of the remaining time as defenders committed several mistakes to raise hope of the Kiyovu strikers.
Simba’s Serbian coach Milovan Circovic replaced striker Sunzu for defender Victor Costa to stabilise the defense.
There was four minutes of added time as Simba fans found them to long for the game to end. Goalkeeper Kaseja feigned injury to exhaust almost the four minutes before the referee warded him a yellow card.
Eventually the game ended with Simba fans relieved of the agony to wait while Kiyovu players mobbed the Somali referee expressing their dissatisfaction for ending the match ‘prematurely’.
Simba have advanced to the nest stage of the Confederations Cup as they are lined up against a team from Algeria.
Line-ups:
Simba:
Juma Kaseja, Shomari Kapombe, Amir Maftah, Said Nassor, Kelvin Yondani, Juma Nyoso, Mwinyi Kazimoto/Mkude, Haruna Moshi/ Ramadhan Singano, Patrick Mafisango, Felix Sunzu/ Victor Costa and Emmanuel Okwi.
Kiyovu Sport:
Batie Shamiro, Egide Mutayisire/Nelly Mayanja, Godfrey Katerega, Yusuf Ndayishime, Eric Sserugaba, Ombeni Mutekurwa, Simon Shauri, Jabir Mutarambirwa, Julius Bakaburindi, Hussein Sibomani and Sam Okwiri.