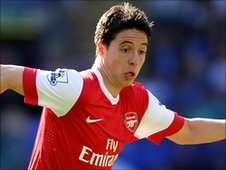 Nasri joined Arsenal from Marseille in the summer of 2008Sir Alex Ferguson has claimed that Samir Nasri has agreed to leave Arsenal – but that the French midfielder will probably not join Manchester United.

Nasri, 24, has been linked with a move to Old Trafford, with the Gunners reportedly turning down a £20m bid from the Premier League champions.

“I don’t think he is coming to United,” said manager Ferguson, speaking at the start of his side’s United States tour.

“That is all I can tell you. I think he has agreed to go somewhere else.”

United’s former England midfielder Paul Scholes retired in May, so Ferguson is on the look-out for a replacement, with Inter Milan’s Wesley Sneijder and Tottenham’s Luka Modric also linked with a move to Manchester.

Nasri has gone on tour with Arsenal to Asia and manager Arsene Wenger has indicated he may keep the player for the final year of his contract – and thus risk losing him for nothing in a year’s time.

“That is his decision,” said Ferguson. “He is the manager.

“If he stands by that decision, it is a brave one. I don’t know if the [Arsenal] directors will enjoy that one but it is possible. Maybe he will have to stay.”

“Will [Nasri] be at the club this season? I say yes. Will he sign a new contract? I hope yes but I’m not the only one to decide that.

“I think Cesc loves the club and hopefully we will manage [to keep him]. The story with Barcelona has gone on for years now and we have to close that. We have to focus on the new season – hopefully with Cesc Fabregas.”