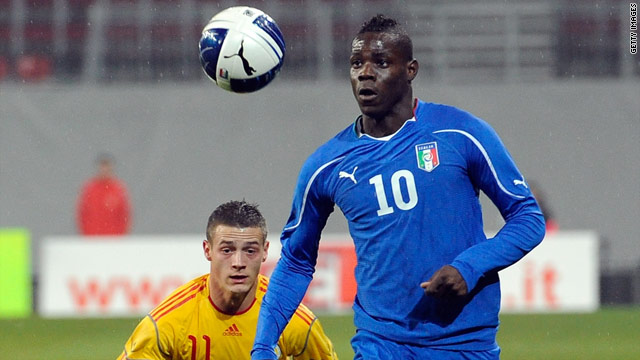 Mario Balotelli has been targeted by racist elements in Italy since making his debut for Inter Milan in late 2007.
STORY HIGHLIGHTS

(CNN) — Italy striker Mario Balotelli has condemned racist abuse from his country’s own supporters during Wednesday night’s international friendly against Romania in Austria.
The 20-year-old, who was born in Brescia but has Ghanaian parents, was targeted by a small group of people who raised banners with slogans including “No to a multi-ethnic national team,” the Reuters website reported.
Balotelli, who is in his first season at English club Manchester City, played for an hour of the 1-1 draw in Klagenfurt before being substituted.
“Honestly, I don’t know what to say. If I have to hear those chants every time, you can’t go forward like that,” he told Italian television channel Mediaset.
“I am happy to be in the national team. It wouldn’t be right to stop a game because a few fans that turn up to the stadium behave like that.

We need to change these people, but it’s not me that has to do it. A multi-ethnic Italy already exists and we can do better.

“We need to change these people, but it’s not me that has to do it. Where I live, the people don’t reason like these people. A multi-ethnic Italy already exists and we can do better.”
Balotelli said he had tried to ignore the insults while on the pitch.
“I’ve learnt that it’s better to pretend that nothing is happening. Thankfully I don’t know the people who insult me — what hurts more are the insults of those who know and love you,” he said in quotes carried by AFP.
“This time I was good, that way no-one can accuse me of having provoked them, so you can be the judges — but I will stay angry and bitter.”
Italy coach Cesar Prandelli backed the player to shrug off the abuse, having experienced it since he began his career in Serie A with Inter Milan.
“I feel disappointment and anger. We always hear these chants and something has to be done about it,” he told reporters after the match.
“We feel helpless. He has the support of everyone. His performance was optimum. He has done really well. It’s a pity in the first half we didn’t have much depth.”
Italian Football Federation president Giancarlo Abete added: “This is something that must be condemned. This is unacceptable behavior.”
Meanwhile, Balotelli denied reports claiming that he was set for an early return to Italy to play with Inter’s arch-rivals AC Milan despite being seen having dinner with the club’s vice-president Adriano Galliani on Sunday.
“The likelihood is that I will be at City up to June. I have a five-year contract and I can’t say anything,” he told Mediaset.

“It’s true that I had supper with Galliani after the [Milan] derby. But had I eaten with [Inter president Massimo] Moratti, the media would have said that I was going to Inter.”