Sport brings people together in a way that no other activity does. A perfect example is the World Cup and Olympic Games. These two events have become global events even as ecstatic enthusiasts in today’s global village enjoy access through their living rooms via satellite television and thereby give the sport a global audience village estimated at billions of viewers.
Viongozi wa zamani wa TAVA. 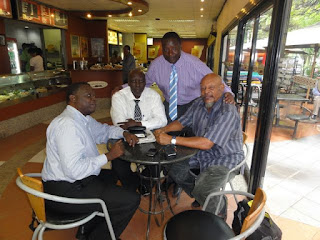 It is this audience which Global Television broadcasters fight tooth and nail to access. This is the audience that sports goods and FMCG(Fast Moving Commercial Goods) are keen to back and provide sponsorship for to attach their brands to.
Your Excellency, you more than anyone else know that a revived Taifa Stars, Ngoro Ngoro  Heroes and Serengeti Boys are on the path towards restoring Tanzani’s past sporting glory which still rests on the shoulders of Filbert Bayi and Suleiman Nyambui.
Both of these athletics greats wrote history and brought sporting glory to Tanzania in the 1970”s and 80’s but their exploits jointly still supersedes any other sporting exploits that this country has ever achieved on the World’s stage than any other team or individual sport.
Tanzania has been left watching as next door neighbours Kenya soak all the glory while we watch with envy . Is it then a lack of effort on our part ? Are we born with no talent? Obviously not!. A journey across this beautiful country will show just how much sporting telent, talent that cuts across all sporting disciplines exists. Yet, our performances continue to want. Our management of sport leaves a lot to be desired.
This single deficiency explains why the Presidency has had to come in to revive our football by acquitring Coaches in ternationally, Maxio Maximo and now, the Poulsens.
It is with this in mind that we mourn and cry over the death of the annual Bonite Volleyball Championship which was held in 1990’8 under the sponsorship of Bonite Bottlers, a company owned by IPP Group under business man Reginald Mengi .
Held annually in Tanzania’s Moshi Town at the Hindu Mandal Grounds, the Bonite Volleyball Championships attraction was so great it attracted over 1000 participants from not just Tanzania but across the width and breadth of Kenya, Uganda, Burundi  and Rwanda.
It is the Bonite championships which brought the idea of an East and Central Africa Volleyball Championships , in itself which has kind of died down.
As Governments thought of East African Intergration, the volleyball community was already doing so in a festival which attracted over 20,000 people to the scenic town of Moshi with a view of majestic Mount Kilimanjaro in the back ground.
It is this festival of people, the business that it brought about that one would appeal to His Excellency to use his goof offices to convince business man Mengi to see the need to revive this annual event while finding means of making it even bigger and more appealing .
This annual did more to East African Integration than any other event will ever do. Lasting friendships were developed here between people and country. Marriages occurred and generally people got to appreciate each other.
Teams like Nabisunsa Girls of Uganda and APR of Rwanda (army) mixed freely with Weru Weru Girls and many others in lasting relations. Surely brand Fanta and Coca Cola could benefit immensely from this relationship. The good office of His Excellency the President can hear the cry of the volleyball fraternity as a beginning even as you give us a national volleyball coach. This has been the traditional nurturing ground and we need it now more than ever.

The author is a sports promoter with interests in sports marketing.
Enhanced by Zemanta